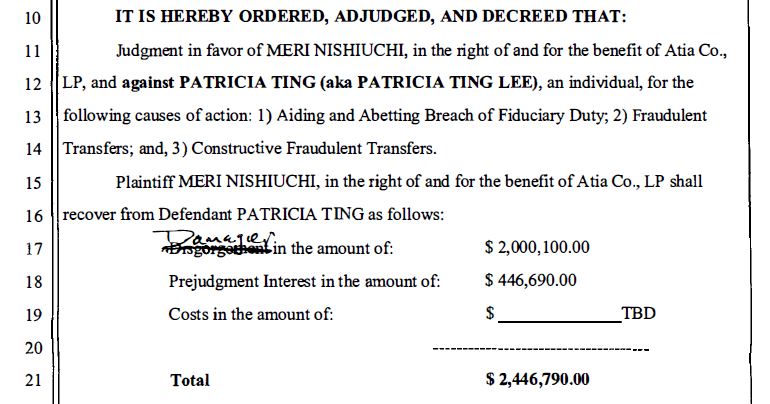 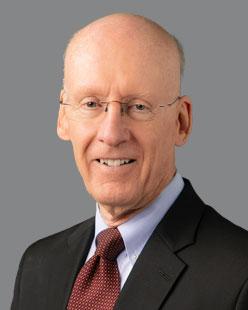 “[Patricia Ting Lee aka: Tricia Ting Lee] remember what exactly the technology was that the company produced, and otherwise could not remember what her investment did, strikes me, once again, as being ludicrous in terms of her memory. Clearly this evidence, this testimony shows no candor or truthfulness on her part. Ultimately, as we know from the Jury instructions, a witness who cannot be believed on one thing probably cannot be believed on other and all things. I take testimony from her, therefore, with a grain of salt.”

The Court: Sorry for the delay. Nothing like building suspense, I suppose. So we return on the record to Nishiuchi versus Ting. And, actually, I would turn first to plaintiff’s attorneys. There was a party defendant in this case named Kang S. Chen. I have heard no evidence that I understand implicates Mr. Chen in any of this. So what’s the status of Kang Chen?

Mr. Nakase: He was dismissed from the case, Your Honor.

The Court: Good to know. Thank you. All right.

So at the outset, The Court, on its own motion, will take judicial notice of the entire court file in the case entitled: Nishiuchi versus Atia Co., Case Number 30-2012-00542358. In particular, I would observe that the Complaint in that case was filed on February 2, 2012. A Notice and Acknowledgment Of Receipt was filed on May 7, 2012. It was signed and dated for Darwin and Keui-Mei Ting and Atia Co., LP on March 21, 2012. An Answer or General Denial for those defendants was filed on April 20, 2012.

In addition, as we see from Exhibit 49, on March 27, 2012 Mr. Ting wired $1 million to Chang Chih International Investments, which of course is the investment name, if you will, or the operating name for a particular player in this whole matter, Andy Zhang.

The money, which of course totals $2,000,100, was all used for the purchase of several properties all in the name of Patricia Ting and her spouse, Michael Lee. The Pasadena Properties, the subject of the purchase, generally were described in this trial as The Catalina and The Del Mar Properties.

The trial of the Nishiuchi Versus Atia Co. case was held before Judge Derek Hunt. An Amended Judgment against Darwin and Keui-Mei Ting and their various family trusts was filed on April 23, 2014, long after much of the activities that are at issue in this case occurred. The Judgment itself awarded damages and interest against the defendants that I’ve just listed for an amount in excess of $9 million.

Prior to that date, on August 15, 2013, Judge Hunt issued his first minute order regarding phase 1 regarding the liability for breach of fiduciary duty of defendant, Mr. Ting in particular, and found against the defendants in that minute order.

On January 13, 2014, Judge Hunt issued his second minute order regarding phase 2 of that trial regarding the amounts to be disgorged back to the limited partnership, and, directed disgorgement by the Tings of millions of dollars.

We turn for a moment to the bakery, Eat Cake. The bakery, of course, was established pursuant to a lease at The Canyon Point Marketplace Shopping Center. That lease, shown as Exhibit 19, required the lessee to pay for the tenant improvements. The lessee effectively was Michael Lee, the name on the lease agreement. We could also ascribe it to the master entity for Eat Cake, the entity known as Divine Creations. We further know that the checks produced in this trial show that Atia, or some subsidiary of that entity, paid for the tenant improvements, all, ultimately, for the benefit of the bakery owners and operators, those including, according to the records, Darwin Ting, Patricia Ting [aka Tricia Lee], Michael Lee.

The defense in this case has portrayed the significant players in this action, the Tings, father and daughter [Tricia Lee], as a loving, rich, generous father just doing some estate planning, and a loving daughter happily accepting the generosity of her father. And I have no doubt that there is some truth in these characterizations. The problem in this case is that the evidence very clearly reveals that Darwin Ting was funding his estate plan with money that belonged to Atia and the partnership that operated Atia and not out of his own pocket.

The Court does not subscribe to the, quote, “coincidence” end quote, theory as driving any of the transfers of money in this matter. Shortly after the Nishiuchi versus Atia lawsuit was filed in early February 2012, Mr. Ting transferred $2 million to his daughter to purchase real estate for cash, no liens, no other money. in other words, the property to be held free and clear.

Shortly after phase 1 of the Nishiuchi trial established Mr. Ting’s liability, the real estate was sold and much of the cash received was given or sent by Ms. Ting to her father, Mr. Ting, again, while now residing in Taiwan.

The defense argues that these events reflect two gifts, one from the father to the daughter and the other from the daughter back to the father. To The Court, all this massive parking funds to avoid Judgement. Some might refer to this as Judgment Proofing. In any event, this seems to me to give proof to the claims asserted by the plaintiffs here that Atia, having been looted of funds by Mr. Ting, was in fact continuing to suffer despite the claims of Mr. Ting’s wealth being some form of opportunity provided at the same time this litigation was going on providing estate planning to benefit his daughters.

I must turn for a moment to credibility, because of course credibility plays some part in all of this. and while i do not like commenting on this particularly, first of all, with respect to Mr. Ting, Mr. Ting, as a witness, as reflected by the deposition transcript, gives no credit to himself. His self-interest and self preservation were too tied up in what he was testifying to and about.

As to Ms. Ting [aka Tricia Lee], I found, quite honestly, Ms. Ting’s appearance, presence, and her manner of speaking to be excellent. At first i thought her to be very credible and very believable. But all of that ultimately was belied by her inability to respond in a form that i think would be mandated by the relationship of daughter and father and daughter and mother in being unwilling, unable to place the address, the telephone number, location, real location of her parents.

And I have to say that i understand that there’s this family thing going on here that would place her in the awkward position of not wanting to give up parents, who obviously could be pursued in further judgment collection matters through the hague convention and otherwise, but she’s a witness on the stand; and she’s obligated to respond with the truth and not with some “I don’t remember” or “I don’t know” response to something as simple as that.

In addition, her responses to the questions about her $500,000 investment, that money derived from the sale of the Manhattan Beach property, which she [Tricia Lee] testified she transferred to an investment house in Taiwan, which just happened to have an investment advisor in Hong Kong and to which she testified that she had invested $400,000 in some tech company for which she couldn’t remember the name of the tech company, she couldn’t remember what exactly the technology was that the company produced, and otherwise could not remember what her investment did, strikes me, once again, as being ludicrous in terms of her memory. Clearly this evidence, this testimony shows no candor or truthfulness on her part. Ultimately, as we know from the jury instructions, a witness who cannot be believed on one thing probably cannot be believed on other and all things. I take testimony from her, therefore, with a grain of salt. All of the inferences from the evidence presented in this Court lead the court to the conclusion and finding in favor of the plaintiff and against the defendants, Patricia Ting, Michael Lee, And Divine Creations.

As to Michael Lee and Divine Creations, on all four causes of action, including conversion, The Court finds against them in the amount of $446,555.

I want to close by expressing my respect and admiration for the advocacy of the defense lawyers in this case. Ultimately I have to say to you that, where I come from, facts win or lose cases. Advocacy is great. You were educators. But I truly, even though the Judgment of which, by the way, I expect it to be appealed, has gone the way it has gone, i want you to know how much I do respect you two as advocates in this courtroom and in this case. Thank you for your participation here.

Mr. Burns: Thank you, your Honor.

The Court: Now, with respect to this matter, what i am going to do, anticipating that there will be a Request For A Statement Of Decision, is indicate that as to the prevailing party, which, i believe, Mr. Nakase, you will happily accept the job, will be to prepare, if the request is made, to prepare a Proposed Statement Of Decision.

I am ordering at this point, should that request be made, to have a transcript of my statements prepared by the reporter, And that to be incorporated by reference and attached to the Proposed Statement Of Decision, please.

Mr. Nakase: Thank you, your Honor.

The Court: All right. so you’ll prepare The Judgment and circulate it, of course. and we’ll find out if there’s any Objection to the Proposed Judgment as well.

Mr. Burns: Could I ask a clarification on the ruling that may — The Court recited that the findings were on, as you said, all causes of action. But that reflects that The Court pre-trial dismissed on nonsuit –

The Court: Only as to the remaining Causes Of Action.

Mr. Burns: Very well. I wanted to make sure that was clear in the record.

The Court: Thanks for the clarification. All right.

The Clerk: I don’t see a Dismissal on Kang Chen.

The Court: Dismissed on your Motion.

Mr. Nakase: Thank you, Your Honor.

The Court: All right. Good luck everybody. Thank you.

Mr. Burns: Thank you, your Honor.

Mr. Cohan: Thank you very much, Your Honor.